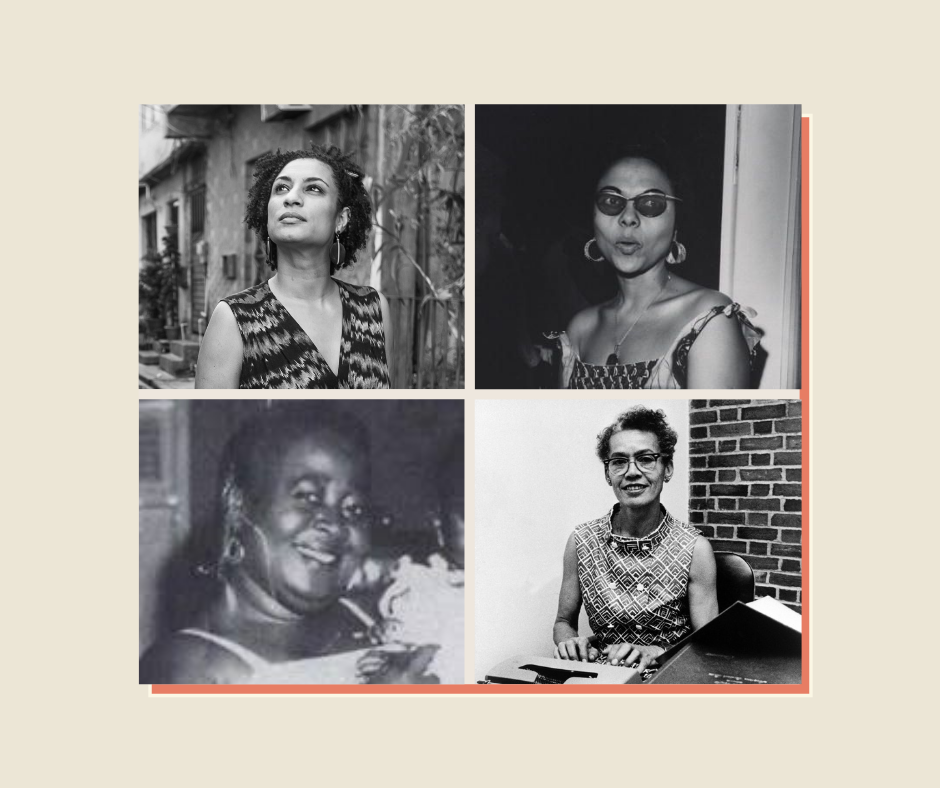 Women of the Past, Women of Freedom

Women as thought leaders in fights for freedom and as community organisers is not new. What is happening more, is seeing these women celebrated during their lives rather than when they are older or posthumously as has been the case in the past. A key reason for this is better ownership of means of amplification through tech, but also a breaking away from the idea that the contribution of women to movements is not as deserving of praise as that of their counterparts.

This Women’s History Month, as we think through the theme of “Women Providing Healing, Promoting Hope,” we want to spend some time looking back at women who have set the framework for what healing and hope look like.

Our focus will be on the women across the African continent, North and South America who led movements for independence from the 1940’s onward.

Born in 1979, Mariella Franco was a council member in Rio de Janerio, feminist, human rights activist, and member of the LGBT community. Growing up in a Favela and experiencing the struggles of Afro-Brazilians with economic inequality and police repression, influenced Franco’s politics.

In 2006, she served in the Human Rights commission of the Socialism and Liberty Party (PSOL). A champion for human rights and staunch activist, she traced cases of massacres, political executions, police brutality, fought for the rights of women and residents of Favelas. As her popularity grew so did her opposition. In March 2018, Franco was assassinated.

Even though she is gone, her work continues to outlive her.

Hannah Kudjoe was a leading nationalist in Ghana’s struggle for independence. Inspired and encouraged into politics by Kwame Nkrumah, she began actively participating and supporting the activities of the United Gold Coast Convention (UGCC) towards the fight for independence. Kudjoe actively participated in organizing mass protests and campaigns. One of which was the release of the party’s prominent members in 1948.

Bibi Titi Mohammed was born in 1926. She became a prominent activist and politician

under the Tangayika African National Union (TANU), a party she co-founded with Julius Nyerere, who went on to become Tanzania’s first president. In 1955, she was appointed to serve as the leader of the party’s women wing, Umoja wa Wanawake wa Tanzania (UWT). Mohammed became a powerful voice within the party and beyond.

After taking the helm of affairs at UWT, she successfully brought on board 5000 women.

With a growing country wide nationalist movement to achieve independence from the British empire, Mohammed forged alliances and collaborations throughout the country. She led engagements, community drives, political campaigns, and fund raisers to finance and raise awareness about the movement. Following the independence of 9th December 1961, Mohammed held ministerial positions under Julius Nyerere’s regime. On 5th November 2000, Mohammed died in Johannesburg, South Africa.

Bibi Titi Mohammed is referred to as Tanzania’s “Mother of the Nation”.

Andree Blouin was an activist, human rights advocate, and writer. With time spent in Congo, Blouin gained first-hand experience of the colonial cruelty. One of such was the refusal of treatment to her two-year old’s illness with malaria by French colonial authorities. She was forced to witness the unfortunate death of her son. This fuelled her desire to become a political activist. In the 1950s, Blouin travelled to Guinea, joining Ahmed Sékou Touré, who later became the first president of the country, on his revolutionary movement before returning to Central Africa.

Upon her return, she mobilized women for the Feminine Movement for African Solidarity, an organization with its mandate around women’s literacy, health, and education of citizens.

Following independence, she was appointed chief of protocol to Patrice Lumumba’s government. Shortly before Lumumba’s assassination, Blouin was expelled from Congo and settled in Paris until her death in 1986. In 1983, her autobiography, MyCountry, Africa was published.

Blouin is remembered as a fierce Pan-Africanist, and organiser.

Born in Baltimore, Maryland, Murray was a lawyer, gender rights advocate and author. She was actively involved in the Civil Rights movement of the 50s. Through her writing she campaigned to enter graduate school at an all-white university, worked to end segregation on public transport as a member of the Fellowship of Reconciliation and published essays on civil rights.

In 1944, Murray graduated first at Howard University Law school and the only woman. While at Howard, she argued the segregation violated the Thirteenth and Fourteenth Amendments of the United States Constitution in a school paper, which served as a base in fighting Jim Crow laws. She went on to co-found the National Organization for Women with Betty Friedan.

With legacies that outlive them, the lives of women like Franco, Kudjoe, Mohammed, Blouin and Murray continue to inspire everyday people and characters in literature.

Our published books feature some strong women reminiscent of these women like Amina and Wurche in The Hundred Wells of Salaga. These women are also the foundation on which the Natalia Molebatsi, Wild Imperfections: An Anthology of Womanist Poems is built.

As we stand on these heroines who came before, it is our duty to amplify their stories.