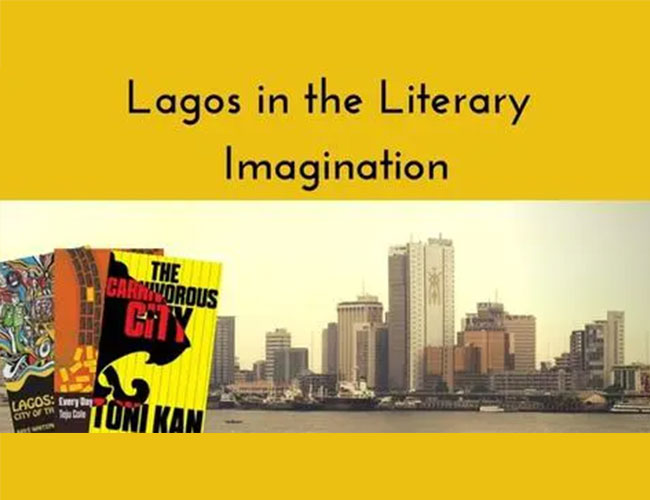 Lagos in the Literary Imagination through 10 books

The embodiment of many things – the bizarre, the impossible, the brilliant, the insane and the downright inane – Lagos continues to be a fertile ground for writers. Africa’s largest metropolis holds many stories, told and untold, as well as memories of the nearly twenty million people that transact across its surface each day.

The long-awaited anthology Lagos Noir edited by one of Nigeria’s finest writers, Chris Abani, will finally join Akashik’s world city noir series that first appeared with Brooklyn Noir in 2004, when it is published in June.

The collection brings together some of Nigeria’s best known literary names – including three Cassava Republic Press authors: Nnedi Okorafor (author of What Sunny in the Flames and Sunny and the Mysteries of Osisi), Sarah Ladipo Manyika (author of In Dependence and Like a Mule Bringing Ice Cream to the Sun), and Leye Adenle (Easy Motion Tourist and the forthcoming sequel, When Trouble Sleeps).

Of course, we are excited about Lagos Noir and we thought we would whet your appetite with 10 Lagos books. Whether it is your favourite Nigerian playground or your most fearful, let us take you on a literary tour across Lagos so you can understand why Lagosians fondly call their city: eko akete ilu ogbon (Lagos, city of iniquity, city of wisdom).

A young unnamed Nigerian man decides to return home, Lagos, after fifteen years abroad. He is confronted by memories of the past as he navigates through a new, yet unchanged, Lagos; filled with energy, brimming with possibilities and corruption. Every Day is for the Thief, first published by Cassava Republic in 2009, is Teju Cole’s first book and it features original photos from the author.

2. Sunny and the Mysteries of Osisi by Nnedi Okorafor

Nnedi Okorafor tells an engaging story that traverses the physical and spiritual world. Sunny and the Mysteries of Osisi will be out by March 26th. Sunny, the albino girl with magical powers, is back and this time she must journey to Osisi with her three friends to defeat Ekwensu, the evil masquerade. But first, they must make a stopover in Lagos to celebrate the New Year and meet Udide, the great spider and storyteller.

3. Lagos: City of the Imagination by Kaye Whiteman

Lagos: City of the Imagination, written by veteran journalist, Kaye Whiteman, takes us back to the beginning of Lagos as both an outpost of the Benin Empire and also the city run by the White Cap Chiefs. Whiteman shows that Lagos was always a multicultural and cosmopolitan city; first with influx of emigres from across what is now known as Nigeria, then the Portuguese and later educated returnees from Sierra Leone, and manumitted artisans from Brazil adding to the eclectic mix of the city. An absorbing and delightful “must-read” for anyone with an interest in one of the most dramatic cities of the 21st century.

Leye Adenle takes readers through a rollercoaster of anticipation with his brilliant debut crime thriller, Easy Motion Tourist. We see the seedy, underworld of Lagos ghettos that provides the stupendously wealthy with their armies of labourers to supply them with everything they need to maintain their lavish lifestyle, including human body parts. Adenle ends the book with a delightful twist that leaves the reader gasping and asking for more, and that more is When Trouble Sleeps, out on 4th September 2018.

5. Everything Good Will Come by Sefi Atta

Yes, Lagos is a cosmopolitan city, home to some of Nigeria’s most creative and experimental people. Yet, the city is also very conservative with patriarchal norms serving as a background chant, and it is here that Sefi Atta exposes the misogyny that tries to thwart women’s freedom.

Sefi Atta’s Everything Good Will Come is an opportunity to view Lagos through the eyes of two young women, living and battling society in a post-civil war Lagos.

In keeping with his unofficial title as the Mayor of Lagos, Toni Kan stays true to form by acknowledging his intimate knowledge of the city in this ode to The Carnivorous City, his #Lagosnoir, published in 2016, which doubles as a map of Lagos and a guide to Lagos living. Kan tracks his story across Lagos island and mainland, paying homage to both notable landmarks and the seedy Lagos underworld.

7. This is Lagos and Other Stories by Flora Nwapa

In this collection of short stories by Flora Nwapa, we find strong women living in postcolonial Africa, fighting a system that unfairly favours men. Nwapa takes us inside the complex interior lives of her characters as they navigate the city of sin with the same lightness found in her seminal book Efuru.

As the first female writer in the African Writers Series, we hope to see Flora Nwapa celebrated more!

With Graceland, Abani takes readers through the ghettos of Lagos, the political unrests of the 1970s/80s, and crime in the big city. We see Lagos through the eyes of the book’s lead character, Elvis, a young man from Afikpo who migrates to Lagos.

Abani is also the editor of the Lagos noir anthology!

In an essay published in the anthology, Safe House, edited by Ella Wakatama Allfrey, Frankie Chike Edozien recalls his love affair with Lamido in Lagos. Edozien, who recently published his memoir, Lives of Great Men, tracks this love affair against the backdrop of discovering his sexuality in Lagos, and the lives of the queer married men of the city. Much like Frankie’s essay, our upcoming title – She Called Me Woman – explores the complex lives of queer Nigerian women.

First published in 1961, we just could not resist including Cyprian Ekwensi’s classic account of the moral decay, social problems and conflict between economic reality and opportunity for love that a city like Lagos opens, especially as it is lived and experienced by the aging sex worker, the title character Jagua Nana.

And as we say in Lagos, let us add small jara for you:

11. Welcome to Lagos by Chibundu Onuzo

First, by looking at the cover of Welcome to Lagos, it is near impossible not to fall in love with the book and be intrigued to read the story contained within. Laced with humour and insight of the political instability that characterized Nigeria’s military dictatorship rule, Onuzo’s novel follows the life of retired army officer, Chike Ameobi, and his journey to Lagos.

This is by no means an exhaustive list and we invite you to add your Lagos book in the comments below: