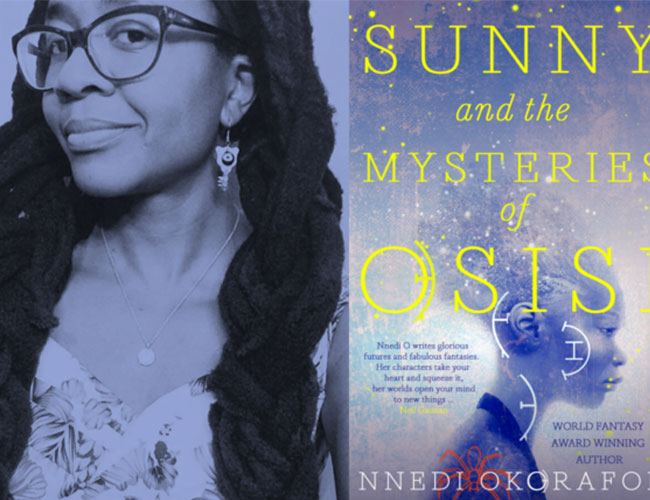 Five reasons why Sunny and the Mysteries of Osisi is a must-read!

Nnedi Okorafor’s latest, Sunny and the Mysteries of Osisi, is out now in the U.K! Five reasons why this is a must read!

Over and over, Nnedi Okorafor has proved to be a master fantasy storyteller, with deft skill at fusing West African traditional belief and philosophical system into her stories, while still developing characters that challenge stereotypes and plot twists that force total immersion in her world.

Nnedi’s stories is a reminder of Bruno Latour’s statement, ‘We have never been modern’, we are always working with and through the wisdom of the ancient and the possibility of modernity.

Recently, we’ve seen works of art exploring black and African history go on to become a huge success, such as Black Panther, essentially increasing the taste and demands for these stories that have long been untold, side-lined and ignored. With over 14 books to her name, including writing for the Black Panther series, Okorafor has consistently been weaving stories around African identity, history, magical realism, futurism, imagination and powerful girls who have a strong sense of their own agency and existence.

Today, we are excited to be publishingSunny and the Mysteries of Osisi(published in the USA as Akata Warrior), the sequel to her widely acclaimed novel, What Sunny in the Flames, which in Nigeria alone has sold over 30,000 copies. The Sunny’s Adventures series (known as the Akata series in the USA and the Sunny’s Adventures series world-wide) is a trilogy that follows the lives of Sunny Nwazue and her three friends, Orlu, Chichi and Sasha, as they battle spiritual forces using their gifts as members of the Leopard society.

But if you’ve not read them yet, here are the top 5 reasons to read the series:

Lose yourself in the rich details of new and imagined worlds, brought vividly to life as we follow Sunny on her adventures. Nnedi Okorafor imagines that another world is possible – one where to be different-bodied is to be powerful and where knowledge is supreme. Escape from the mundanity and the troubles of our lives and step into a surreal world of delicious strangeness. The Sunny’s Adventures series is a breath of fresh air in fantasy writing, bringing a whole new dimension to the genre with its exploration of juju and masquerades. In place of mermaids and selkies, for instance, we have the dreadlocked Mama Wati.

‘Who are you Sunny Nwazue?’ is a constant refrain in Sunny and the Mysteries of Osisi and through Sunny’s epic journey in the series, she must learn to understand and embrace herself and come into her own power.  In Sunny, Okorafor has created a fiercely determined, football-loving, albino protagonist who stands against ascribed gender roles and arbitrary beauty patterns. Okorafor has always written about strong female characters that is rooted in African ideas of female strength and power, and Sunny is no exception.

To progress in the Leopard society, the secret community that Sunny and her three friends are part of, one must gain knowledge solely from reading, and for any new knowledge gained, Chittim (the currency of the Leopard people) is earned. Sunny must also learn to read Nsibidi (the Nigerian script that inspired Wakandan writing in Black Panther), imagined here as a magical script that completely immerses the reader in the book. In the Sunny’s Adventures series, reading is a way of life and the only way to grow, earn and survive in a world filled with unspeakable dangers. This is every book lovers delight! This is a book for both adult and young people.

4. A Re-imagining and Celebration of West African Culture and Society

Afro-juju, history and modern society merge together to form a unique backdrop for this series, recreating popular Nigerian cities such as Aba and Lagos as cosmopolitan centres of learning, steeped in a magical culture. Nnedi Okorafor re-centres the polytheistic belief systems that served as a life guide for many West African societies pre-colonialism, presenting them not as works of evil or barbarism, but simply as forces that can serve the purposes of good and evil.

In Okorafor’s hands, the Leopard Society common among the Igbo and Efik of Southeast and South-south Nigeria, is brought back to life, blended with her unique imagination to create something new and exciting. 5. Tackling the issue of Confraternities

Known for their acts of violence, confraternities have long been part of Nigeria’s higher education system. Stories of violence and forced initiation into these confraternities are nearly ubiquitous in most state-owned institutions. Despite this, stories about them are largely absent from Nigeria’s literary cannon. In Sunny and the Mysteries of Osisi, Okorafor tackles the issue head-on, bringing confraternities into her narrative, affording readers an opportunity to glimpse into this hidden world.

Join Sunny on her thrilling adventure in Sunny and the Mysteries of Osisi, out now in the UK! And available for pre-order in Nigeria.

Still haven’t read the first book in the series? Click here to purchase What Sunny Saw in the Flames!