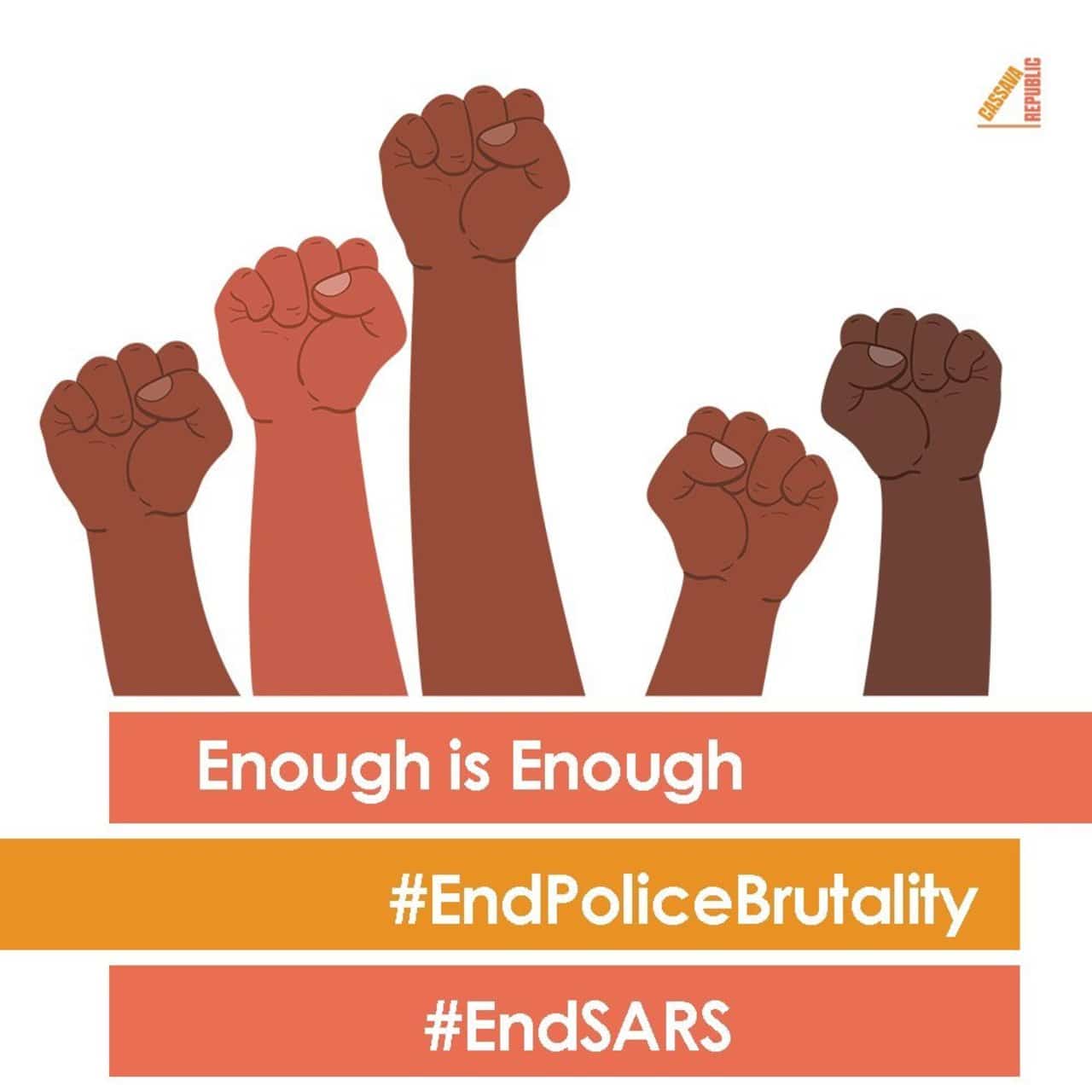 What we are seeing in Nigeria at the moment: people going into the streets to protest police brutality against everyday citizens, is not new, and that, the rebuilding and returning to the same places that they are terrorised daily, to demand change, is what makes the actions of the thousands who have taken to the streets, revolutionary.

If you are unaware, a significant portion of Nigerians, across the country, have taken to the streets and social media to call for an end to SARS (The Special Anti-Robbery Squad). In their words, SARS, rather than serve to protect everyday Nigerians, have become terrorists: assaulting and stealing from the very people they have been assembled to protect. The placards tell tales of being stopped and extorted by SARS officials for looking: too feminine, too well equipped with technology, too masculine, too underdressed, too suspicious, too haughty. Reading between the lines, the placards might as well read: “assaulted for being too alive”.

That protesters are being met with guns, tear gas and water cannons, only serves to highlight the daily brutality citizens face at the hands of these officials, because if this is what they do with the cameras on, we can only imagine and shiver in fear at what happens when cameras are not present. This sight of black bodies protesting police brutality seems to be the stock image of 2020. Nigeria’s current cry of liberation from SARS officials is reminiscent of the images that sparked a global wide call that #BlackLivesMatter at the start of 2020. 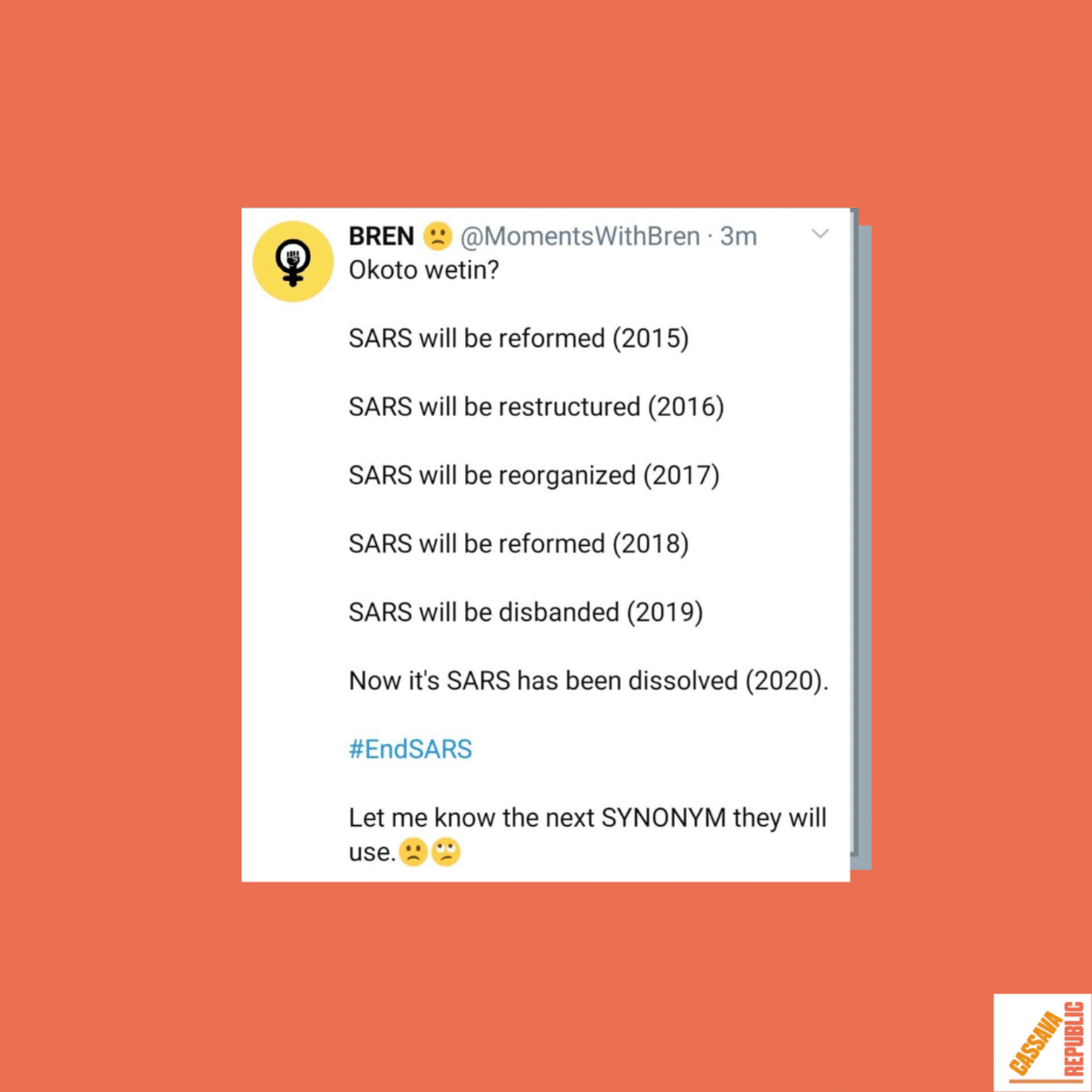 It is a reminder that policing as an establishment is in need of reformative, imaginative  restructuring because when we give tools of war: guns, tear gas, water cannons and batons to people operating within civil society, the end result can only be traumatic.

For people looking on from the outside, the announcement by the President of Nigeria that SARS is now dissolved likely sounds like good news; a show that protest works but for Nigerians, we know that the government often plays smoke and mirrors with language. In the last five years, SARS has been reformed, restructured, reorganised, reformed, disbanded and now dissolved. On paper, SARS has seen more transformations than most roads in the country, but in person SARS has worsened, becoming bolder in the realisation that they are laws unto themselves only.

In the protestors, we have seen resilience, community and resolve cement to create a global call that #SARSMUSTEND. We have seen the creation of organisations Feminist Coalition and Women Against SARS, among others, and the way that they have mobilised to raise money to fund bail, hospital bills and sustenacne for protestors across the country. We have been reminded that hope exists and thrives within, particularly Nigeria’s millennials and Gen Z. 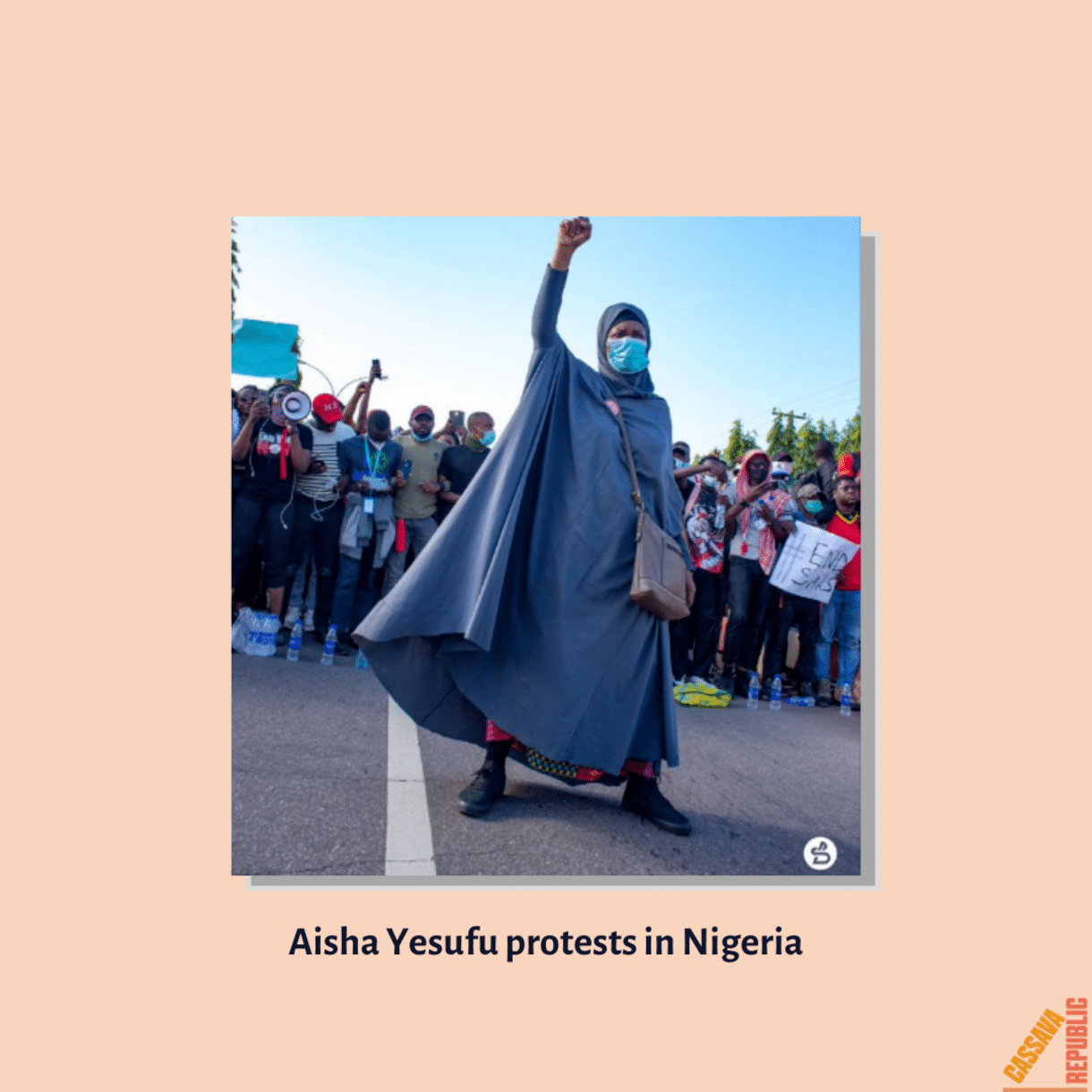 Beyond Nigeria, 2020, has been a year where we have been reminded that the future has promise. COVID has been an awful disease but in the face of a pandemic, people have embraced protesting as a way of airing long seated grievances. We have seen images of women leading the charge in Nigeria both on and offline, we have also seen women in Namibia take to the streets in an anti-GBV protest #ShutItAllDown. One common theme and concern is that where there has been protest; a lawful activity, there has been violent retaliation by government and security forces. Protestors have all been met with guns, tear gas and assault. The price of revolution is very clearly painful, but still the voices for change persevere. 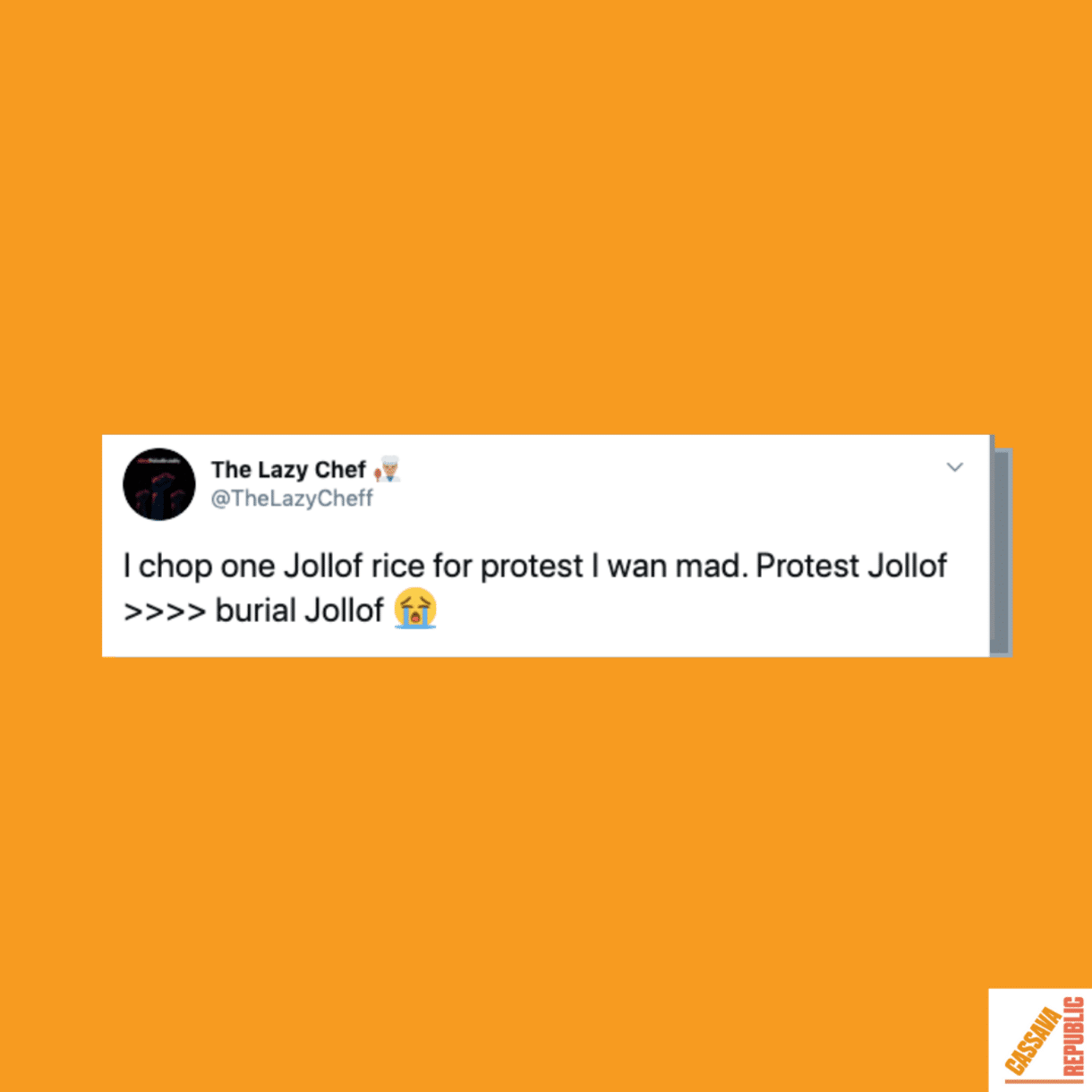 Also, and in true Nigerian fashion, we have had comic moments, spaces where protestors, in the face of uncertain danger, have allowed for a humour that is so specific to us to shine through. And this humour is at the heart of the humanity of Nigerians who have mastered the art of tragi-comedy, a skill necessary in mentally surviving the everyday of living in Africa’s supposedly greatest nation.

This is comedy we are not unfamiliar with, in fact it is comedy that we have ourselves indulged in during parts of lockdown. We are of course talking out Elnathan John’s Be(com)ing Nigerian, which our very own Bibi named as one of the highlights of her lockdown experience. The satirical tongue of Elnathan’s guide perfectly reflects the coping mechanisms that has long defined the way Nigerians deal with the everyday realities of existence. But today, particulalry, we look at the “How To Be A Police Officer“ section of the guide and oscillate between tears and laughter because the ridiculously grim condiitons that define policing in Nigeria are no better laid out than in John’s narrative. 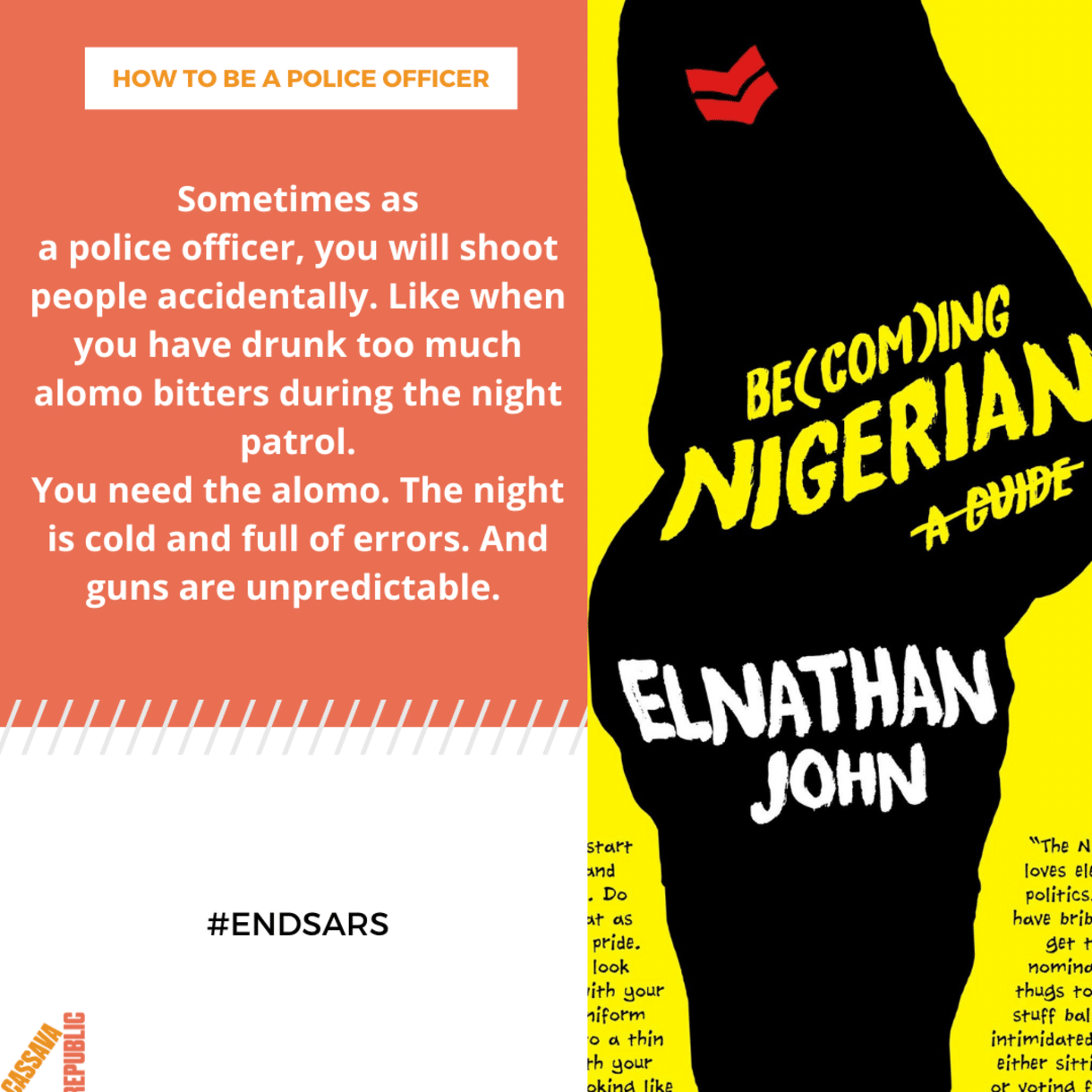 The dissolve of SARS is still just words, action on the ground reminds us that people remain unsafe and change is still an upward journey. So wherever you are in the world, we hope that you answer the call to put pressure on the Nigerian government to #ENDSARS. Whether through social media channels or donations to the Feminst Coalition, Nigeria is calling to join a life or death fight against police brutality and we hope that you join us in answering.

Subscribe now to the Cassava Republic newsletter for more insights, exclusive content and updates on all forthcoming titles!

I like it when people get together and share ideas. Great blog, continue the good work! Kamillah Burk Wilson

Do you mind if I quote a few of your articles as long as I provide credit and sources back to your weblog? My blog is in the very same area of interest as yours and my users would genuinely benefit from a lot of the information you provide here. Please let me know if this okay with you. Cheers! Kathlin Dew Shulman