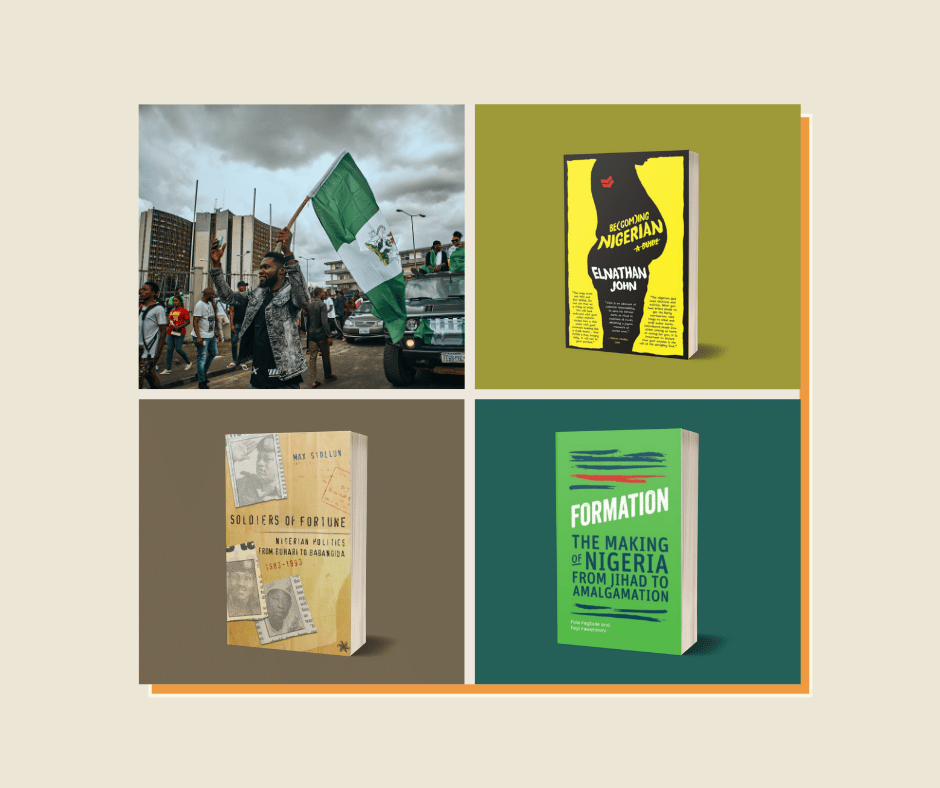 As the most populous country in Africa, the largest Black nation in the world, and with hundreds of ethnic groups and languages, learning about Nigeria’s complex political history could be daunting for even the most interested person. However, it is important to learn where we have come from, to be able to make informed decisions about our future. It is also important to read about some of the critical issues we faced in the past, so that we understand the present and don’t repeat the same mistakes.

In the run-up to the February 2023 election, we have selected 6 books that should guide you in this election season.

Formation: The Making of Nigeria from Jihad to Amalgamation by Fola Fagbule and Feyi Fawehinmi

What do you get when dare-devil Jihadists, mad English missionaries and proud, stubborn, warring natives meet in a clash? The answer, Nigeria.

Formation tracks the unlikely series of events and characters that led to the creation of the modern Nigerian state: from 1804 when the first Jihadists began their attack on a collection of independent nations to 1914 when the current shape of Nigeria was completed as a British colony through amalgamation. Formation challenges the orthodox understanding of Nigeria’s past as merely a product of colonial interference, revealing an incredibly complicated portrait of a nation with a tangled history, where slavery, violence and instability was and remains a primary organising principle for elite competition and political negotiations. This book is necessary for anyone interested in tracing Nigeria’s current problems to its root causes.

Halima’s Vote: The Modern Parable About the Impact of Vote Buying in Nigeria by Onyinye Ough

Our votes are our power. They are not for sale.

It is never too early to teach children the importance of voting rightly, and this book is evidence of that. Halima’s village was forgotten by the government, with no schools, clinics, or clean water. At election time, politicians would come with small gifts of cash or bags of rice to win the votes of the villagers. Halima was a hardworking woman but also very timid. Until one day something bad happened to her village that made Halima determined to stand-up for the rights of her people. This book teaches children aged 6 to 10 about the power of voting, and the damage caused by corruption in elections.

Soldiers of Fortune is a fast paced and thrilling narrative of the major events of the Buhari and Babangida era. The years between 1983 and 1993 were momentous for Nigeria. Military rule was a time of increased violence, rampant corruption, coups, coup plotting and coup baiting. It moulded the conditions and character of Nigeria today, forcing seismic changes on the political, economic, and religious landscape that nearly tore the country apart on several occasions. Siollun’s fresh perspective challenges preconceived views to reveal the true story behind major controversies of the period: the annulment of the June 12 election, the dubious execution of Mamman Vatsa, the foiled kidnapping of Umaru Dikko, the Orkar coup and the inconclusive case of the assassination of Dele Giwa. It is a must-read for all Nigerians and Nigerian watchers.

Love Does Not Win Election by Ayisha Osori

I was tired but not traumatized. I had wanted the experience of contesting elections – a different kind of education – and I got it.

This book details Ayisha Osori’s journey on her attempt to win the primary elections of the People’s Democratic Party (PDP) and become the flagbearer for the party’s general elections into the House of Representative. Humorous, engaging, and written in simple English, this book presents a first-person perspective on campaigning for office as a woman in Nigeria.  Ayisha Osori sheds light into the muddy waters of Nigerian politics and exposes the barriers that stand in the way of winning elections. Barriers like money, godfatherism, and nepotism. This book is a must-read for anyone who seeks an insight into the inequality and corruption that occurs in Nigerian politics.

The Trouble with Nigeria by Chinua Achebe

The trouble with Nigeria is simply and squarely a failure of leadership. There is nothing basically wrong with the Nigerian character… The Nigerian problem is the unwillingness or inability of its leaders to rise to the responsibility, to the challenge of personal example which are the hallmarks of true leadership.

The eminent African novelist and critic, here addresses Nigeria’s problems, aiming to challenge the resignation of Nigerians and inspire them to reject old habits which inhibit Nigeria from becoming a modern and attractive country. In this book, Achebe argues that the only trouble with Nigeria is the failure of leadership. With good leaders, Nigeria could resolve its inherent problems such as tribalism, lack of patriotism, social injustice, indiscipline, corruption, and the cult of mediocrity that pervades the country. Just 68 pages long, this book brilliantly analyses why Nigeria remains the way it is.

The Nigerian God loves elections and politics. When you have bribed people to get party nominations, used thugs to steal and stuff ballot boxes, intimated people into either sitting at home or voting for you, eventually, (through God’s grace), win the elections, you must begin by declaring that your success is the will of the Almighty and living God and that the other candidate should accept this as the will of God

In Be(com)ing Nigerian: A Guide, Elnathan John provides an affecting, unrestrained and satirical guide to the Nigerians you will meet at home and abroad, or on your way to hell and to heaven. It is a searing look at how power is performed, negotiated and abused in private and in public, in politics, business, religious institutions and in homes. From the exploration of religious hypocrisy to inequality in matters of the heart, the collection is a jab at Nigerian society and what it means to be a Nigerian. Beyond poking fun at the holders of power, it is a summons, a provocation, and a call for introspection among all levels of society. As is often said, when you point with one finger, there are four others pointing back at you.