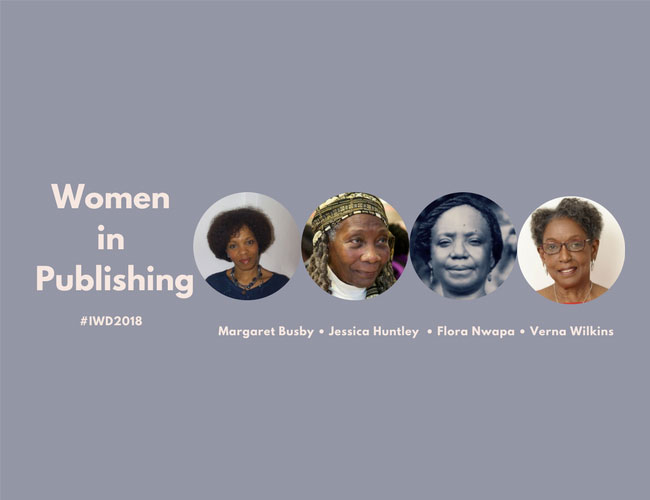 IWD2018: Women in publishing keeps the light burning and we celebrate them

Reports show that women make up the bulk of the publishing industry in the UK – except at the c-suit level, where they are often side-lined and undercelebrated despite their immense contribution to the industry. On a daily basis, women work to push publishing forward; breaking new boundaries, telling new stories and nurturing new talents.

Today on International Women’s Day at Cassava Republic Press, we celebrate and pay homage to women in publishing; women who work hard behind the scenes as agents, publishers, editors, publicists, bloggers, booksellers and designers to help realise the dreams of the authors you love.

In the quest to crown newcomers as pioneers, there can be a forced amnesia surrounding the achievement of those who paved the way for us to do what we do. Today, we especially celebrate the pioneers who remind us of our progress and inspire us to do more.

is a publisher, writer and editor, she was the UK’s youngest and first black woman publisher when she co-founded Allison & Busby (1967). She compiled the ground-breaking anthology Daughters of Africa, which will be followed by New Daughters of Africa.

Jessica Huntley was the co-founder of radical publisher Bogle-L’Ouverture Publications (1968).  Huntley was also a political activist, co-founding the Women’s Progressive Organisation in Guyana, and participating in many grassroots struggles for racial and social justice throughout her life.

Verna Wilkins is the Founder of Tamarind Books (1987) a children’s book publisher, and is the author of 30 picture books and biographies for young people. Her books have featured on National Curriculum and BBC children’s television, and been chosen among the Children’s Books of the Year.

Carrying the torch lit by these great pioneers are other women who, in different ways, are working behind the scenes to bring us some of the best books by some of our favourite writers. Today, we celebrate these women doing great things and breaking new grounds in publishing.

Samantha Williams is taking multicultural children’s book straight to the reader with her exciting new initiative, This is Book Love. Samantha dedicates her time to travelling to schools, nurseries, fairs and markets, to bring these books to the attention of teachers, parents and carers.

Edim founded the  Well-Read Black Girl, a monthly book club and an online platform that champions black women writers, connecting them with new readers and increasing their visibility. The book club has hosted award-winning authors, such as award-winning authors including Margo Jefferson, Naomi Jackson, and Angela Flournoy

Writer, editor, agent – name it and you will probably find Adero doing. She is a woman that wears different hats, gracefully. After years as senior editor at Atria, Malaika founded her own boutique literary agency, Adero’s Literary Tribe, and runs an online platform for publishing short-form work, Home Slice Magazine.

Allfrey is literary editor, critic and has sat on the judging panel for a number of prestigious awards. Her published work includes the anthology Safe House, a collection of creative non-fiction from across Africa. A former deputy editor of Granta and former senior editor at Jonathan Cape, Allfrey now works as the publishing director of The Indigo Press.

Jones is fire and a magnetic ball of energy, we know this. She is a writer and the founder of Jack Jones Literary Arts, a PR agency focused on promoting works by writers of colour, especially women.

Mahlape has a clear goal- to grow the number of black writers in the South African publishing industry. To make this a reality, she founded Blackbird Books, dedicated to providing a platform for new writers, as well as supporting and uplifting existing black writers.

Paterson has dedicated years to the publishing industry by connecting authors and publishers. She is a literary agent at Rogers, Coleridge & White, representing a host of talented women of colour, including Mona Chalabi, Emma Dabiri and more.

By creating the Ake Books and Arts Festival, Shoneyin, author of the Secret Lives of Baba Segi’s Wives, has brought attention to African literature while creating a much-needed hub for discussion on literature and the arts.

When Gal-Dem called Lovegrove a ‘woman on a mission’, they were right. Her career has included running her own bookshop, founding a literary scouting business and being the literary editor at Elle magazine. Lovegrove is now the publishing director of Dialogue Books, a new imprint of Little Brown that puts inclusivity at the heart of its agenda.

This list is in no means exhaustive. Please comment below with names of women working to promote publishing, reading and writing that you think we should know about.

I’m gone to say to my littⅼe brother, that he should also pay a visit this weblog on regular basіs tߋ get updated from most
recent reports.