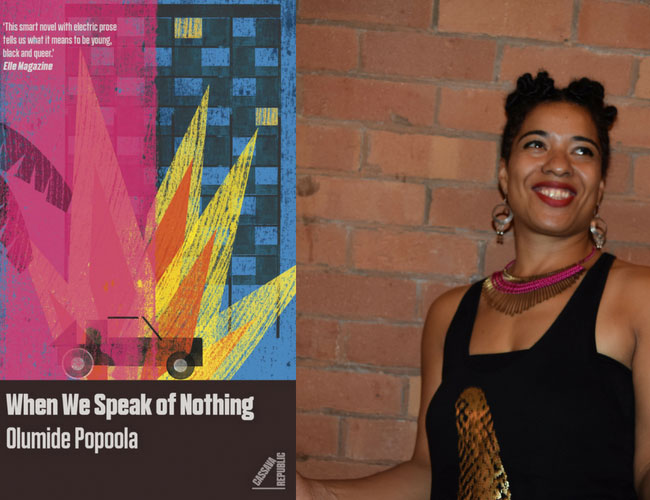 Pride Month may be over but there’s still room for celebration! We’re celebrating one year since the publication of Olumide Popoola’s amazing debut novel When We Speak of Nothing, a book that captures what it’s like to be young, black and queer.

It has been a year since Olumide stunned us with her book that challenged our assumptions and stereotypes of what it is to be young queer and black in the UK and in Nigeria. A year since we were bowled over, by the way, Olumide expressed and immortalised the f rhythms of London slang. A year since Olumide immersed us in London’s Kings Cross which is being gentrified beyond recognition, and to a Port Harcourt whose environment is still being ravaged by the oil industry.

Photos from the London Launch Party

Olumide’s book deserves a huge birthday celebration because its originality and its warmth are rare. Her characters still linger with us and the issues she shone a light on still need to be discussed. The joys and the struggles of the marginalised characters Olumide centres in her novel are still relevant because, amidst all the talk of diversity and inclusivity coming from all sectors, there are still constant reminders that much more action is still needed. For every voice appealing for inclusivity and for empathy, there are voices trying to silence and dehumanise the most marginalised in the world.

We only have to look at the statistics to remind ourselves that things need to change.

LGBTQI people, poor people, and migrants continue to be oppressed, to be dismissed and to be discriminated against.

Writers like Olumide Popoola are crucial in the fight against discrimination and exclusion because they remind us of the humanity of the numerous voiceless, powerless individuals whose right to exist continues to be questioned because they are silenced by the intolerance of others. Olumide’s book has the power to transform lives by giving a voice to those all too often marginalised.

Happy, happy birthday When We Speak of Nothing!

Tags:
LGBT Olumide Popoola When We Speak of Nothing

Everything is very open with a very clear explanation of the issues.
It was really informative. Your website is very helpful.
Thank you for sharing!